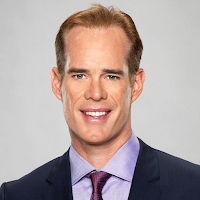 A pair of NFL broadcasting stalwarts and Fox Sports originals hit career milestones in Weeks 12 and 13 as late November turns to early December. Joe Buck became the 18th person and 10th play-by-play announcer to call 400 NFL telecasts on Thanksgiving, while Sunday, Dec. 6, will be Kevin Harlan’s 450th NFL telecast, making him the 12th person and seventh play-by-play announcer to that point.

This post will focus on Buck; Harlan’s will come soon after, once we see that he did in fact work a game this week in the age of COVID.

(Yes, this Buck post is a week or so after the fact. We were thinking about how Buck calls Thursday Night Football and the Thursday night game between Pittsburgh and Baltimore was postponed; of course, on Thanksgiving, the TNF crew calls a game in the afternoon.)

Buck is 51 and has been with Fox since 1994, which means that his 27 seasons as an NFL and/or MLB announcer constitute the majority of his life. In truth, he’s probably closer to 22 NFL seasons, having called just 16 games total between 1996 and 2001, and Fox didn’t gain MLB rights until 1996, which means he has 25 years under his belt there.

Buck spent two seasons (1994-95) working alongside Tim Green before pairing with Bill Maas for part-time duty in 1996 and 1997. In 2001, he partnered Brian Baldinger for four games.

2002 brought the semi-retirement of Pat Summerall and saw Buck elevated to Fox’s lead team with Troy Aikman and Cris Collinsworth. The Buck-Aikman duo has covered 19 years of Thanksgiving games and 18 years of playoffs, with the 19th set coming here in a month or so. Collinsworth moved to NBC and NFL Network in 2005, while Pam Oliver gave way to Erin Andrews as the A-team sideline reporter in 2014.

Through Thanksgiving 2020, Buck and Aikman have called 352 games together, the most of any NFL pairing except Summerall and John Madden. Collinsworth joined them for 55 games.

Buck’s 60 NFL playoff games are the joint third-most by a play-by-play announcer (Summerall 82, Al Michaels 61 and Dick Enberg 60). Aikman has worked each of those games; he also called the final game at old Soldier Field, the Bears-Eagles divisional tilt in January 2002, alongside Dick Stockton.

Buck has seen the Packers the most in his career, calling 93 of their games, closely followed by the Cowboys with 90. The Giants (72) and Eagles (64) make up the rest of his Mount Rushmore. He’s done every team’s game at least twice, but has never worked a Dolphins game on Sunday afternoon and didn’t get the Bills between Nov. 20, 1994, and Oct. 19, 2020.

Among the 52 stadiums in which Buck has worked, Lambeau Field (34) is the most common followed by Cowboys/AT&T Stadium (51). Five of his top 10 facilities are in the NFC East (including Giants Stadium and Texas Stadium but not FedEx Field) and three others are in the NFC North.

While the NFL TV contracts come up for rearrangement after the 2022 season, which makes it tough to do much micro-level predicting past that point, Buck should pass Paul Maguire by then to move into the top 16 NFL announcers overall. Moving up on the charts is kind of difficult when the two men immediately ahead of him are Aikman, who works just as many games, and Jim Nantz, who has the same workload at another network.

That will do it for this Joe Buck statistics post. If you're in Oregon, southern California, New England or Buffalo, tune in to CBS for Kevin Harlan's 450th game in the late slot today.

Until next time, good night, good luck and don't run with scissors.

(Photo above is a Fox publicity photo so that this shows up with an image on the social media sites.)

Posted by Unnecessary Sports Research at 7:45 AM